Skip to Content
By continuing to use this site, you agree to the use of cookies. Find out more
0

How do you go about publishing a book? How long does it take? Isn’t it just a simple matter of printing it out and putting a good cover on it?

When Leah and I (Ella) first started Kurumuru Books, we thought we had it all sussed out. We’d both worked in publishing for a long time, had experience of different editorial processes, and were excited to do something that few publishers were doing – publishing in translation.

Our first project was Elena Traina’s ‘Amarantha‘, a beautiful Italian fantasy novel. We fell in love with its main character Lyria, who is anything but your typical princess. Although she prefers to read books and play music all day, she is drawn on a quest to journey across the continent of Amarantha, to cure herself of a mysterious illness that has stolen her voice. Along the way, she meets spirits, makes new friends, and investigates her mother’s murder.

If that wasn’t amazing enough, Elena had also written and recorded a musical soundtrack to go with the book, making it a complete and immersive reading experience. We knew we had to acquire this book! So, how do you even start such a huge project?

First, we negotiated a contract with Elena, who gave us the rights to publish her novel, then found a translator who could bring this Italian story to an English-speaking audience. Marinella Mezzanotte worked incredibly hard to translate the Italian manuscript for us.

Once we had an English draft of the novel, Leah and I put on our editing hats and thought, how can we make this story the best that it can be? Together with Elena and Marinella, we re-worked certain scenes, character arcs and plot points, until the book sang, all its parts fitting harmoniously together.

But that wasn’t the end of the editing process! Next came the line edits, and then the copy-edits. With each stage, we were going further and further into each sentence and word, looking at the book under a microscope to make sure that each sentence was perfect. At the very end, the typesetting could begin – this means putting the words together on the page so it looks good in a book. There aren’t any messy cut-off words anywhere, the fonts are all perfect (and who doesn’t love choosing a font?) and all the extras are added in, like the helpful pronunciation guides at the end, and the little treble clef images at the top of the page that let you know when to listen to a song with the scene.

At the same time, our cover artist, Jacob Boniface, was putting the finishing touches on the cover. We were also producing the eBook version of ‘Amarantha’, which is a little different to the paperback version – instead of the treble clef images that tell you when there’s a song, we’ve put in links to take you directly to the music.

Next came the proofreading! This means looking at the finished book, finding typos and thinking, “Oh my God, how did we miss this, we’ve read this book over 30 times now!” Luckily, we still had time to fix things before sending the finished book files to…

The printer! We love our printer, Clays in Suffolk, who went the extra mile to make the beautiful paperback editions of ‘Amarantha’. Leah and I especially loved choosing the special gold foil for the cover – who doesn’t love shiny things? Despite lorry driver and paper shortages, the shiny new books arrived at our doorstep.

Aside from all the exciting book production work, Leah and I also had to deal with all the business things in the background – taxes, registering with different sales platforms, building the website, setting up social media, accounting… the list goes on! But now we could finally get ‘Amarantha’ into the hands of readers.

The road to publication may be a long one, but for Elena, the journey began long before that. She had the idea for the novel when she was a teenager, and it slowly developed in her mind until she sat down to write the first draft during the 2015 NaNoWriMo. After lots of editing and the composition of the beautiful soundtrack, ‘Amarantha’ was published in its original Italian in Italy, in 2017.

Yet the journey isn’t over now that the English edition is out. We hope that ‘Amarantha’ will be translated into lots more languages for readers around the world to meet Lyria and join her on her quest through the magical continent of ‘Amarantha’… 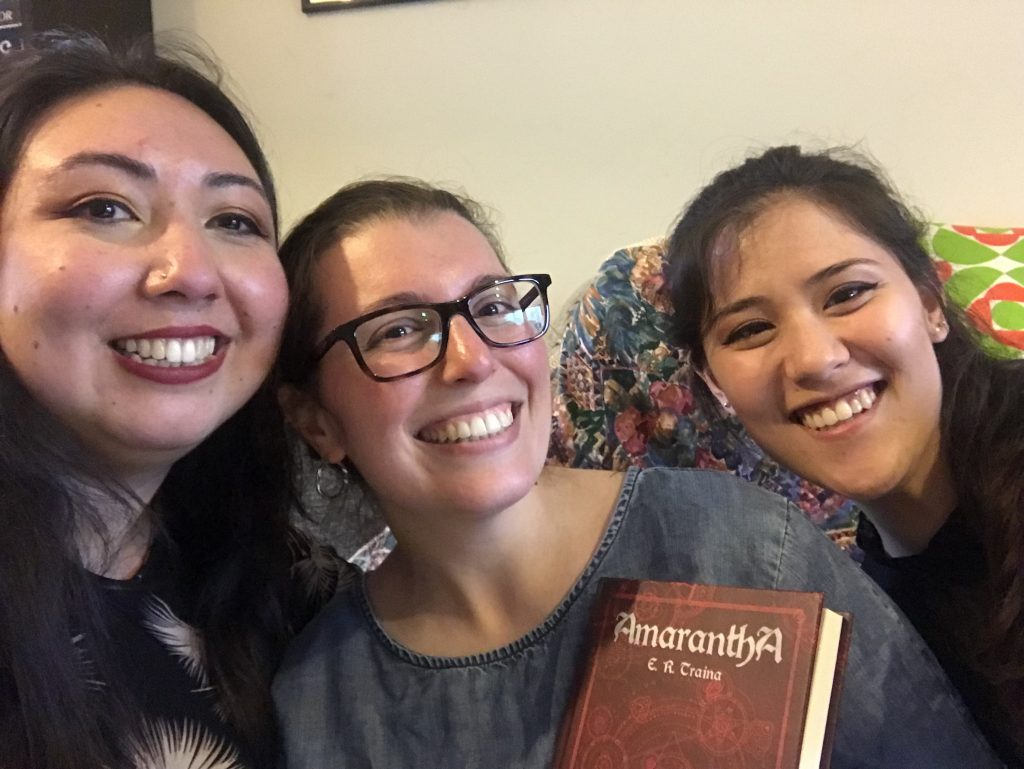 Ella, Elena and Leah at the beginning of the long road to publication.